„We can not save the whole world, but we can help to make it a little better!“ This is the motto that accompanies us in our work and that determined our thoughts when we heard about the fate of the Micić family last November from Velika Hoča. During the night of 14th to 15th November, “strangers” stole the cattle from the barn of the family, which partly makes a living selling cheese and milk.

„I always had milk for the babies, could sell milk every day, and I also brought cheese to Kosovska Mitrovica for sale. From this money I paid electricity and other costs. And today my grandson comes back from school looking for milk, and my soul hurts because I can not give it to him. And I have no money to buy another cow … I fed her for years, she fed us. … and the calf was taken too.“

That’s how Snežana Micić described the situation shortly after the incident.

Shortly thereafter, we launched our appeal for donations. With the help of many good people, we collected an amount of 2562.83 euros. Thanks to the support of the monks of Visoki Dečani Monastery, a new animal was purchased for 1500.00 Euro, which was handed over to the Micić family on 28th March. Even a calf could be acquired in the meantime.

A good friend from the neighboring Orahovac now visited the family to give us some more recent impressions to conclude this project. She sent us some pictures and talked to the Micićs. Son Saško said:

„I would like to greet all the people involved in the collection of the money given to us through Visoki Dečani Monastery to buy a cow. I send great gratitude to all good people. This cow means a lot to me because my parents live on animal husbandry. I am married and have two sons, and we live in Velika Hoča. I run agriculture. With a friend, Miroslav, we grow wheat and corn in the fields that we have leased. We have a combine harvester that we received from Arno Gujon and his organization Solidarité Kosovo. After two years of hard work, we bought a second. The thieves of the stolen cows and calves we did not find. I go to the police constantly to ask if they have found the thieves, but they deny it. And the more time passes, I do not think they’ll find them.“

Snežana also said that the help they received was very significant, as cows milk and cheese bring in almost all the family’s income.

„The cow we bought from the money collected by good people is now pregnant and we hope to get a new calf after May 6th. We hope that they will not steal the animals anymore. We are always alert and lock everything.“

Once again, we would like to thank all the helpers, supporters and donors who made this project possible, which was one of our biggest ever. The rest of the donations will flow into a new project, about which we will report shortly as usual. 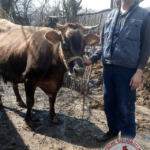 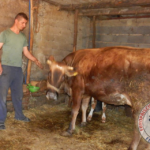 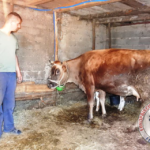 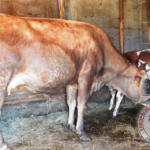 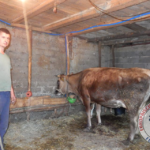 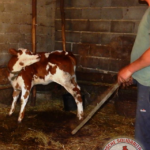 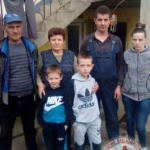