In their current issue the weekly newspaper Jedinstvo (unity), reportes in an article also about our this year’s May-Mission. 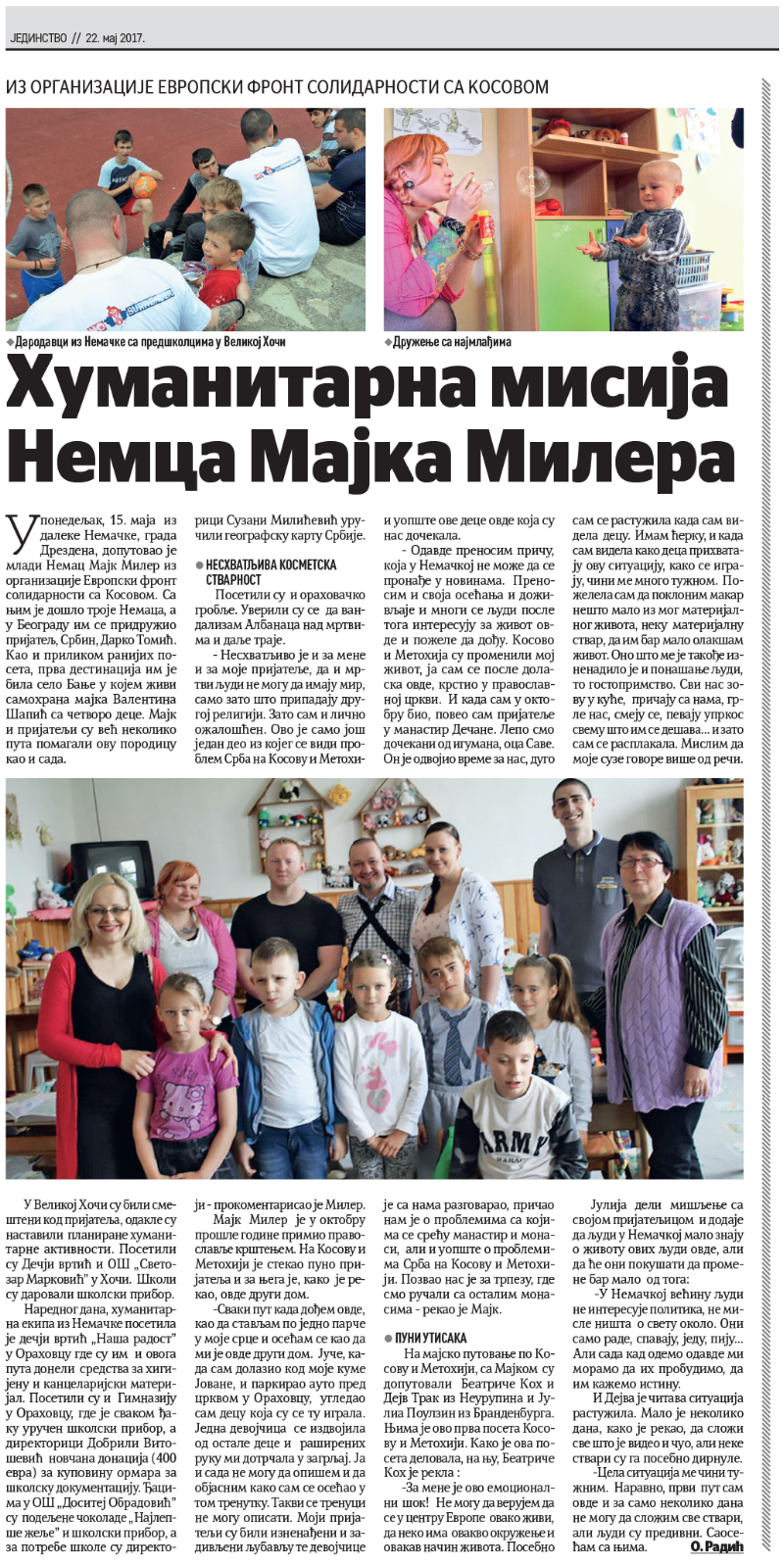 From the European Solidarity Front for Kosovo

On Monday, 15th May, the young German Maik Müller from the European Solidarity Front for Kosovo traveled from distant Dresden to Kosovo and Metochia. Three other Germans came with him and in Belgrade the Serbian friend Darko Tomic has joined the group. As in previous visits, the first stop of the trip was the village Banje, where Valentina Šapić, the mother of the family, lives with four children. This family was again supported by Maik and his companions as in previous years.

In the town of  Velika Hoča they were housed by friends, from where they could continue their planned humanitarian actions. They visited the nursery school of the “Svetozar Marković” school in Velika Hoča and presented their school material donations to the school.

On the following day, the German aid group visited the kindergarten „Naša radost“ in Orahovac, which was once again given hygiene articles and office materials. Also at the Gymnasium in Orahovac a visit was paid and school and writing materials were given to each student. And the director Dobrila Vitošević has received a donation of 400 euros for the purchase of new cabinets.

The students of the primary school “Dositej Obradović” received chocolate “with the very best wishes” and school material. Suzana Milićević, the principal, took a new map of Serbia for geography lessons.

The group also visited the cemetery of Orahovac. There they have gained the sad certainty, that grave desecration by the Albanians still continue. “It is incredible, both for my friends and for me, that even dead people can not have peace just because they belong to a different religion. This makes me deeply sad. This is just one of the many visible problems the Serbs have to face in Kosovo and Metochia”, commented Mueller.

Maik Müller was baptized in the Orthodox Church last October. In Kosovo and Metochia he has found many friends and feels this region as his second home, as he says.

“Every time I come here, my heart always fills a bit more and I feel like I’m in my second home. Yesterday, when I visited my godmother Jovana and parked the car in front of the church in Orahovac, I looked at the children who played there. A girl broke from the group and ran out to me with arms outstretched to embrace me. Even now I can not describe and explain the feelings I felt at this moment. Such moments can not be described. My friends were surprised and delighted at the love of this little girl and of the other children who have received us here.”

“Here I collect the stories we can not find in the news in Germany. There, I share my impressions and experiences, and try to raise people’s interest in learning more about life here, or even to come there with us. Kosovo and Metochia have changed my life. After my visits, I was baptized in the Orthodox Church. And when I was here last October, I took my friends to the monastery of Visoki Decani, where we were warmly welcomed by the abbot, Father Sava. He took time for us to talk about the problems of the monastery and the monks, but also the general problems of the Serbs in Kosovo and Metochia. He invited us to the table where we ate with the monks”, Maik told us.

How the visit had affected her, Beatrice Koch answered as follows:
“For me this is an emotional shock. I can not believe that one lives in the heart of Europe under these conditions and circumstances. The situation of the children particularly affected me. I myself have a daughter and when I have seen how the children deal with the situation, as they play, it has made me very sad. I wanted to share some of my life with the children, at least something material to make the lives of the children at least a little bit more bearable. Something that also impressed me is the behavior of the people here, the hospitality. Everyone would like to invite us to their own home, to chat with us, to embrace us – and despite all the events, the people were laughing and singing. This all stirred me to tears. I think my tears say more than words.”

Julia shares the opinion of Beatrice and adds, that people in Germany know little about the lives of the people here, but that they will be happy to change at least a part of it:
“In Germany, the majority is not interested in politics and not so much in the world around them. Most people go to work, eat, drink and sleep again…
When we return, we will try to wake up some of them and show them the truth.”

Also Dave feels sad about the whole situation. “A few days are not enough,” as he said, “to process all the impressions.” But some things particularly struck him: “The whole situation makes me sad. Of course I am here for the first time and the few days are not enough to collect all impressions and experiences in the short time, but one thing can be said: The people here are great, I feel with them.”