In their current issue the weekly newspaper Jedinstvo (unity), reportes in an article also about our this year’s Mission. 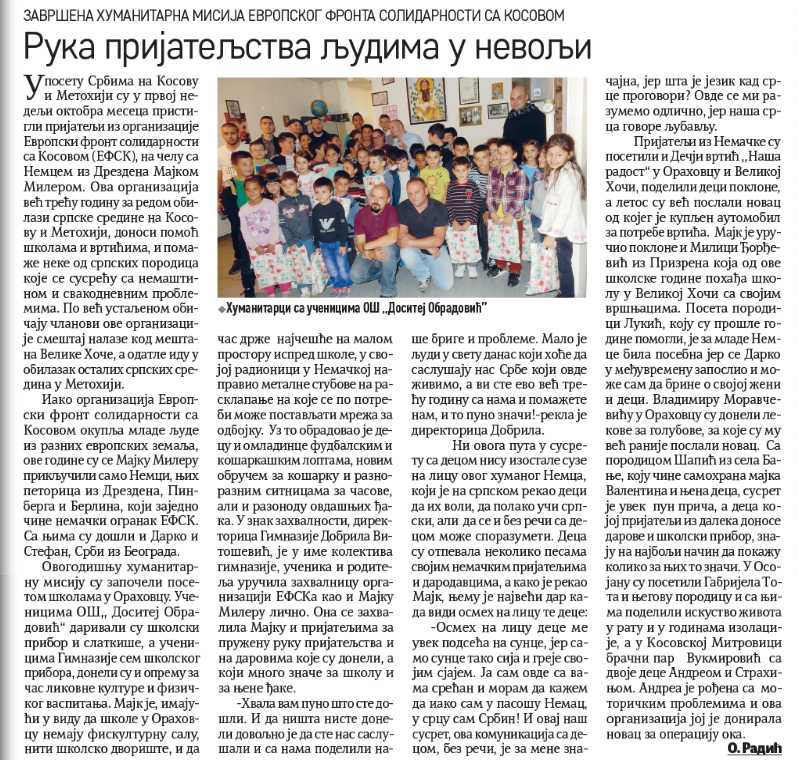 Another ESFK mission has been successfully completed.

They are the outstretched hand of friendship for the people who are in need and do not enjoy freedom.

In the first week of October our friends from the ESFK, led by the German Maik Müller from Dresden, have arrived. This organization is already visiting the Serbian municipalities in Kosovo and Metohija for the third year. They help the schools, kindergartens and Serbian families who are struggling with poverty and everyday problems. As usual the members of this organization found accommodation at the inhabitants of Velika Hoca. From there they went on to the other Serbian communities in Metochija. The Organization includes young people from different European countries, but this year Maik only accompanied Germans. Six of them were from Dresden, Berlin and Pinneberg. Together they form the German part of the ESFK. With them came Darko and Sinisa, two Serbs from Belgrade.

This year’s humanitarian mission began with the visit of the school in Orahovac. They donated school materials and sweets to the children of the school „Dositej Obradovic“. They brought school materials and equipment for the subject arts, culture and sports to the students from the Gymnasium. Maik already knew much earlier that the school in Orahovac has neither a sports hall nor a schoolyard, and that the students perform the sports classes on a small square in front of the school. In his working place, in Germany, he made metal bars, which can be used to create a mobile volleyball system. To this he added various balls and a lot of other things, which the children were very pleased about. As a sign of gratitude, Mrs. Dobrila Vitosevic, the director of the Gymnasium, gave a personal thank-you letter to the organization and to Maik Mueller in the name of the students and parents. She thanked Maik and his friends for the outstretched hand of friendship and the gifts they brought, which are very important to the school and its students. „Thank you for coming, and even if you had not brought anything, we would still be grateful for your concerns. There are just few people in the world who want to listen to what we Serbians from Kosovo have to say and you are already here for the third year in a row and help us and that means a lot to us!“, said the director Dobrila.

This time again tears flowed on the face of human German who told the children in Serbian that he loves them and that he is learning Serbian, but he can also communicate without words with the children. The children sang some songs for their friends from Germany. As Maik said, it is for him the greatest gift to see the children smile. „The smile of the children reminds me of the sun because only the sun radiates and warms with its appearance. And this meeting, this communication with the children, without words, is important to me, because what is the language when the heart speaks. We know each other perfectly, because our hearts speak through love.“
Our friends from Germany also visited the nursery „Naša radost“ in Orahovac and Velika Hoca. They distributed gifts among the children and over the summer they had already sent money from which a vehicle for the needs of the kindergarden was bought. Maik also handed over some small things to Milica Djordjevic from Prizren, who has been attending the Velika Hoca school since the beginning of this year. The meeting with family Lukic, where they helped last year was special for the young Germans, because father Darko found a job and can now take care for his wife and children on his own. Vladimir Moravcevic from Orahovac they brought medicine for his birds, for which they had previously donated the money. With the family Sapic from the village of Banja, which consists of the single mother Valentina and her four children, many stories are exchanged at the meeting. The friends from afar brought school supplies for the children. In Osojane they visited Gabrijel Tot and his family. With them they shared their experiences during the time of the war and the years of isolation. In Kosovska Mitrovica they visited the couple Vukmirovic and their two children Andrea and Strahinja. Andrea was born with a disability and the organization donated money, for the surgery of her eye. Maik said, „my friends and I can not change the world, but we can try to make the world at least a little nicer, at least for a short time to please someone with our donations. Our action aims to provide financial support for certain things. However, collecting donations is very difficult in the West, where the people mostly think about themselves. But if we try hard enough, we can find the few people with a pure heart and strong will. With the help of such people we enable the mission. During our mission, an attack on an older Serb in Osojane occurred and we understood that Serbs in Kosovo and Metochia still are facing bad things. A few months ago they stole the birds from a young Serb from Orahovac. We sent him money for a hundred new birds, so that Vladimir, the owner of the doves, could still look confidently into the future. In Orahovac we visited Vladimir to see if the hundred birds were really in his farm. And so everything fits, our outstretched hand of friendship is needed for those people who are in trouble and do not enjoy freedom. With our own eyes, we have convinced ourselves that the stories of Serbian victims are true. We can not change the history, but we can spread the truth. These people have no freedom, but they have the desire to achieve it, and we have the hope that one day, right the doves of Vladimir, will proclaim this freedom“, said Maik.