DEČANI. On the evening of January 30, at 21:00 clock, a group of four armed Albanian Islamists was arrested before the Serbian-Orthodox monastery Visoki Dečani in Kosovo. Italian KFOR troops searched together with the Kosovo Police, the suspect and the vehicle, a white VW Golf, at the main gate of the monastery. During the search in addition to relevant Islamist literature also an assault rifle AK-47 and a pistol and the respective related ammunition were found and secured. The potential attackers are young men in the age between 20 and 34 years, who come from different parts of Kosovo. At least one of the people was, according to media information in the past, trying to leave the province about airport Pristina towards Syria.

Already October 2014 Unknown sprayed graffiti of ISIS and AKSH (Albanian National Army) on two monastery gates and only 4 months before a graffiti of the UÇK / KLA (Kosovo Liberation Army). The police investigation of these incidents have led to no results. Since the war ended, the Visoki Dečani monastery has experienced four armed attacks. Only one attack was investigated by the police and a Kosovo Albanian sentenced in 2007 to 2.5 years in prison for the attack on the monastery.

In a first reaction the abbot of the monastery, Father Sava Janjić, informed that the monks and the staff employed at the monastery feel safe and that this incident is yet another indication that the presence of KFOR, which has protected the monastery in the past 16 years, is important for the security of this important religious site, which is a UNESCO world Heritage Site of Serbia.

Further Father Janjić condemned a statement by the spokesperson of the Kosovo Police, Baki Kelani, after the incident would not be associated with terrorism, but it is only handle a case of illegal possession of arms. Also, it would not correspond to the facts, that the Kosovo Police stopped the car with the suspects. The video footage of CCTV cameras around the monastery shows clearly that the Islamists themselves stopped the car in front of the monastery and the police patrol arrived later to check the documents and the car. “It’s sad,” said Father Janjić in his statement, “that the spokesman of the Kosovo Police Mr. Kelani made incorrect statements without knowing the facts and without someone was requesting from the Kosovo Police, to see the video files directly after the incident. The publishing of any desired information gives the impression of an underestimation of the case. This is also detrimental to the already diminished trust of our church in the Kosovo Police, particular in relation to the protection of our locations that are no longer protected by KFOR.” 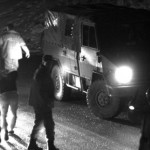 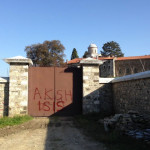 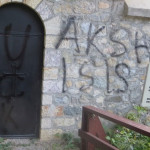