On October, 14th the largest and highest-circulation daily newspaper, Vesti (News), for Serbs and former Yugoslaws, who are living in Germany, Switzerland, Austria and the whole of Western Europe as well as in North America and Australia now, reported about our this years mission. Here you can find the translation from the Vesti-online, that is just a little bit different from the printed issue. 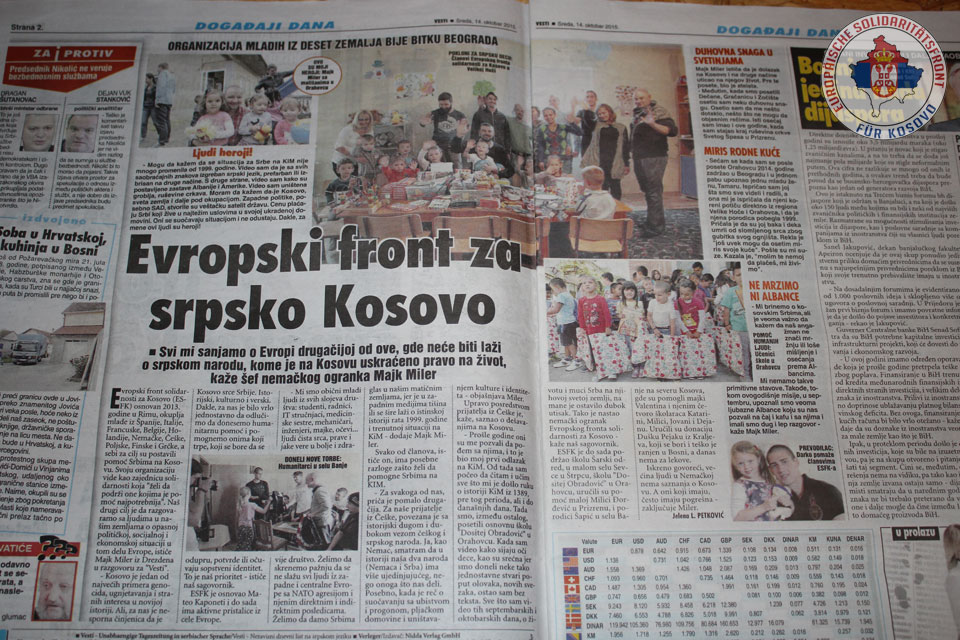 European front for a Serb Kosovo

The European Solidarity Front for Kosovo (ESFK) was founded in 2013 in Rome and unites young people from Spain, Italy, France, Belgium, Holland, Germany, Czech Republic, Poland, Finland and Greece and has the aim to help the Serbs in Kosovo. Their organization they see as a solidary community “we want to help those who need our help most”:

Our second goal is to talk to people in our home countries and make them aware of this dangerous political, social and economic situation in this part of Europe, explained Maik Müller from Dresden in an interview with “Vesti”.

– Kosovo is one of the largest examples of genocide and the pursuit of foreign interests in modern history. For us it is clear that Kosovo is the heart of Serbia. Historically, culturally and religiously. For us, it was logical to make the decision to provide humanitarian assistance and to help those who persevere and secure their identity. That is our priority said our interlocutor.

Spiritual Power in the sanctuaries.

Maik Müller told us that for him, the arrival in Kosovo has done well in a different way on his life. Prior to his visit there he was an atheist. “When we visited Decani, Gracanica and Zociste, I felt a spiritual energy. The visit touched me and I can not explain with words. The same feeling I had this year when I stood before the ruins of “Svetog Spasa” church in Prizren”, Müller told.

The ESFK was founded by Matteo Caponetti and has members throughout Europe.

– We are just ordinary young people from all levels of the society: students, workers, IT professionals, nurses, mechanics, engineers, mothers, fathers … people with an honest, pure heart and a strong belief in a better society. We want to show that not everyone is in agreement in Western and Central Europe with the NATO aggression and its direct and indirect consequences. We have the desire to give the Serbs a voice in our home countries, because in Western media is silent or lies about the events during the war in 1999 and the current situation in Kosovo and Metohija – Maik Müller added.

Each member, he explained, has a particular reason why they help the Serbs in KiM (acronym for “Kosovo i Metohija”).

– For each of us, the story is a little different. Our friends from the Czech Republic joins her long and deep historical ties with the Serbian people. I as a German think we can find more connectedness in the history of our two peoples than what sets us apart. Especially what expulsions, killings, looting of property and the destruction of cultural identity is concerned – explained Müller.

Through my friends from the Czech Republic, I learned what is going on in Kosovo.

– Last year they invited me to go with them and that was my first visit to KiM. Since then, I began to read everything and learn everything I could find about the history of KiM since 1389 and before that as well as up to the present. At the time we visited the elementary school “Dositej Obradovic” in Orahovac. When I saw how the children’s eyes sparkled because they were so happy about the gifts that were quite simple, such as pens, notebooks … that left me speechless. Everything I learned in those days in September and October 2014 about the life and their worries in their Holy Land, made a big impression on me. So the German Department of ESFK started it´s work – said our interlocutor.

Against the inclusion of Kosovo in UNESCO

ESFK is clearly against the inclusion of the so-called “Republic of Kosovo” in the UNESCO.

– The current debate on the inclusion of Kosovo in the UNESCO is the continuation of war by other means and still stirs the more understandable fear among the Serb minority. The handover of the Serbian cultural and religious objects in the hands of the so-called “government of Kosovo” must be rejected. Until now these holy places must be protected by units of KFOR from attacks by extremist Albanians. We will condemn the attempt to include this artificial state at UNESCO. The cultural and secular heritage of Serbs in KiM, their culture and identity must be protected. Therefore, hands off! So a message on their page: http://esfkosovo.org/?p=373.

So far, the ESFK supported school “Sarski odred” in the small village Sevce in Strpce, the school “Dositej Obradovic” in Orahovac, they helped the small Milica Djordjevic in Prizren and Sapic family in the village of Banja in northern Kosovo, where they helped Mother Valentina and her children Katarina, Milica, Jovana and Dejan. They helped Dusko Pejak from Kraljevo, who has to fight hard with his injury from Bosnia and can not afford the necessary medicine.

– Honestly, people in Germany know virtually nothing about Kosovo. The know something, most have only false information, Müller concluded.

The smell of your own home

Müller recalled a situation in Belgrade, as a girl stated it’s love for her homeland in Kosovo.

– I remember when I was in Belgrade after visiting Orahovac in 2014. And in a pub, a young woman came to know, Tamara. I told her what we had seen and done and she told me that her roots come directly from Velika Hoca and Orahovac and that her family fled in 1999. She said that her grandparents died of a broken heart because of the loss of their home. She said “I can still smell the scent of our house.” I was in tears. She said “Please stop crying, we live” . told the German.

We hate no Albanians

– We take care of the Kosovo Serbs, but it is especially important that I say that our actions means no hatred or negative thinking about Albanians. We have not such primitive points of view. During this year’s mission in September we also met friendly Albanians, who invited us to tea and coffee, and with them we had long and interesting conversations – said Maik Müller.