The weekly Jedinstvo (Unity), brought on October 5th a report about this year’s mission. The article appeared on pages kosmet.org and pravoslavie.ru as well. 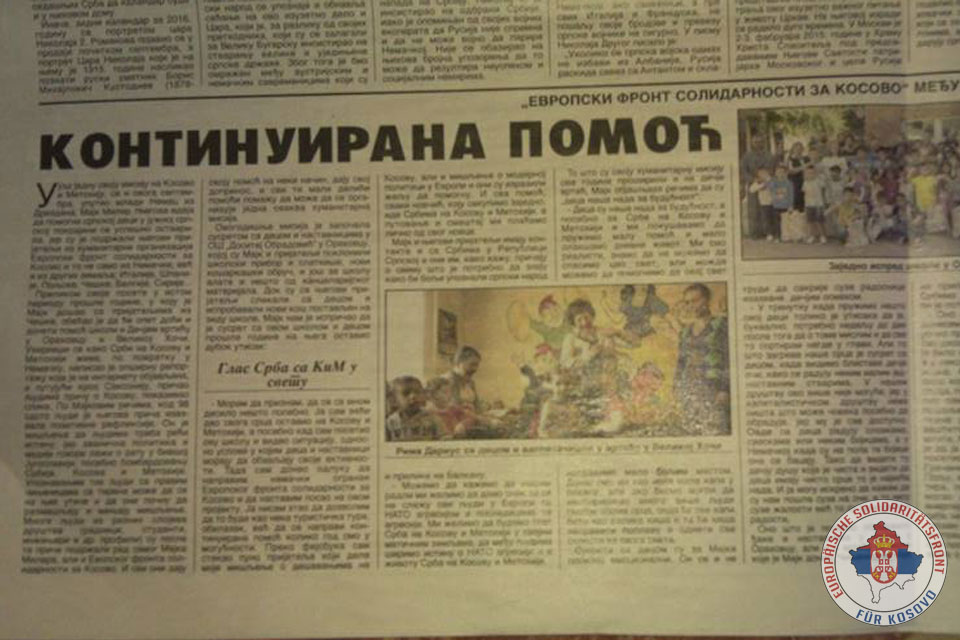 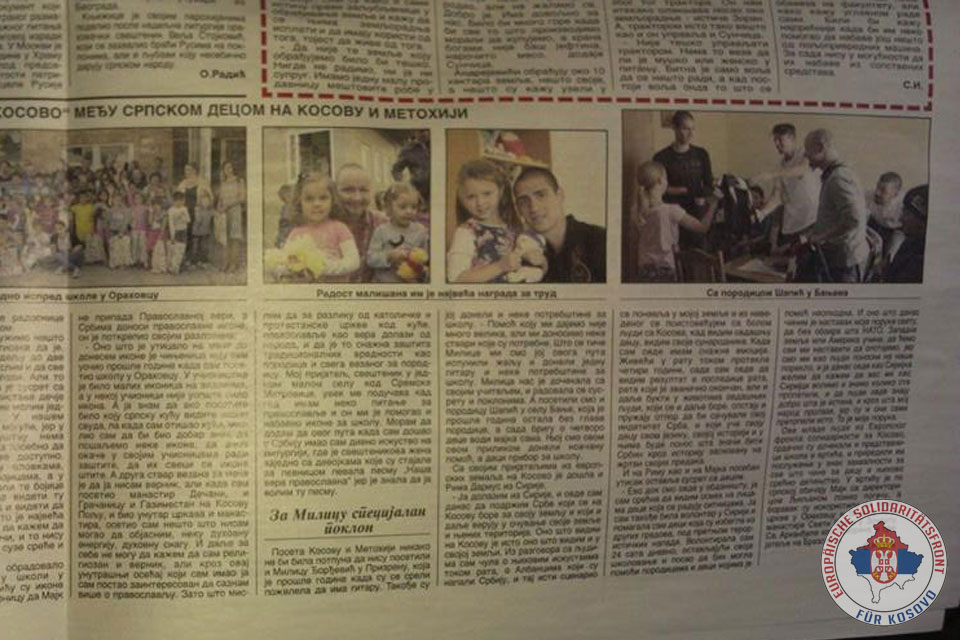 Children are our future – especially for the Serbs in Kosovo and Metohija and their shining eyes warm our hearts said the German Maik Müller in Orahovac.

In another mission in Kosovo and Metohija, the young German Maik Müller from Dresden was this September. His idea to help Serbian children in the southern province has been successful. At his side stood his friends from the ESFK not only from Germany but also from many other countries: Italy, Spain, Poland, Czech Republic, Syria …

During his last visit in the same period of last year, in which he was traveling with friends from the Czech Republic, he promised to return and bring assistance to the school and the kindergarten in Orahovac and Velika Hoca. With the knowledge about how the Serbs living in Kosovo and Metohija, he created on his return to Saxony a report which was published on the Internet. During his journey through Saxony he told people about Kosovo and showed them pictures. Maiks words to follow its history came at 98% on positive reactions. With the idea of people having to report the truth, because in the official politics and the mainstream media, they tell lies about the war in the former Yugoslavia, especially about the bombing of Serbia, Kosovo and Metohija. In the one indicating the people on these facts, we can help to ensure that they start thinking about it and, where appropriate, to change their views. Many people from different organizations (workers, students, engineers and Dr. titlist) began after learning of its history, to support the work of ESFK. They all make their little help in their own way and contribute to provide such an organized humanitarian mission to his feet.

This year’s mission began at the elementary school “Dositej Obradovic” in Orahovac, when Maik presented with his friends school supplies, distributed sweets to the children and donated a basketball hoop and tools. Maik told us that his meeting with these children last year left a great impression on him: “I must admit that something unique has happened to me. I have lost a large part of my heart in Kosovo and Metohija, especially when I visited this school and saw the situation. At the time I made the decision to create a German organization within the ESFK and continue my work on this project. I did not want to admit that the whole thing is a tourist tour, but that we are doing a continuous assistance, as much as is possible precisely. About Facebook, I found a lot of friends, who share my attitude about events in Kosovo but also about the modern politics in Europe and they had the desire to help. The money we gathered together, everything goes to the Serbs from Kosovo and Metohija, the journey there we pay by on our own.”

Maik and his friends also have contact with Serbs from the Serbian Republic, they tell them everything they need to know to understand the Serbian people better.

The humanitarian mission expanded and helped this year also the kindergarten. Maik said: “Children are our future”.

“Children are our hope for the future and especially for the Serbs in Kosovo and Metohija and we try to give them a little help, and to facilitate their everyday life. We are realistic, we know that we can not save the whole world, but we can at least make this world a little better. Today we are only a few tears in a large ocean, but if we are able to inspire more people by the power in our hearts, then these tears will become a rain that makes a flood that inundated everything bad from this world.

In the moment in which we help these children, the impression on you is so great that to two weeks you need a to sort the whole thing in my head. But the meeting with the children warmed our hearts and the sparkle in their eyes when they look forward to a very simple and small things. In our society, this is no longer possible, because in capitalist society, there is nothing more that a man can so enjoy, because everything is available. Here children welcome pens and notebooks. In Germany, many pins throw away already, if they are used up halfway. To see this child’s soul and her pure heart, is the greatest hope and I can honestly say that having us moved to tears and have been no tears of sorrow, but tears of happiness and hope.”

What the children and teachers was particularly pleased at the school and the kindergarten were the icons that Maik has brought. The fact that Maik is not Christian-orthodox, but brought icons for the Serbs, he described as follows:

“What moved me to bring the icons was the fact that always be in Serb houses icons. However, I noted during my visit last year at the school in Orahovac, that some rooms have icons and others do not. When I came home I thought it would be a nice character next time bring icons that can be attached to the walls of the classrooms of the children, so that the saints protect them. Another thing related to me is that I am not a believer, but when I visited the monasteries and churches Decani and Gracanica of Kosovo and found myself in it, I felt a spiritual energy and power, something I can not describe. While I can still not consider myself to be a believer, but by this experience the Orthodox Christian faith awakened my interest. I think the difference between the Orthodox Church on the one hand, and the Catholic and Protestant church on the other side is that in the Orthodox Christian faith emanates from the people and that their faith protects their traditional values such as the family and everything so related. My friend is a priest in a small village near Sremska Mitrovica, he enlightens me with all my questions about the Orthodox Christian faith and helped me here to get the icons. I would add that during my visit to Serbia this year I had the wonderful opportunity to be part of a liturgy, in which the wife of the spiritual together with the girls sang the song “Nasa vera Pravoslavna”. She knew that I like this song.”

For Milica Djordjevic a very special gift – a guitar

Your visit to Kosovo and Metohija would not be complete if you had not visited Milica Djordjevic in Prizren who wished a guitar last year. They brought her, but also necessary things for school.

“The help we offer is not too big, but we bring things that are needed. What Milica is concerned, we have fulfilled her desire for a guitar and brought things for school. Milica has waiting for us with her teacher and rejoiced over our presents. We also visited the family Sapic in the village of Banje whose family patriarch died last year. The responsibility for four children now carrying the mother alone. We brought money for school books and materials for the children.”

With his friends from European countries but this year also came Rima Darius from Syria.

“I come from Syria and have come here to the Serbs to support them in their fight for their country, which continue to believe in it to defend their territory. That what I see here in Kosovo, is the same thing I see in my country. During the talks with the people, I found out about their experiences during the war, about the attacks of the Albanians on Serbia. The same scenario played out just in my country, so I sympathize with the people here. When I see the children here, I see my people. During my stay here I feel strong emotions. I lived the last four years during the war and see here now the aftermath of the war, people here are struggling to survive and defend their Serbian nation and identity. Teach the children in their language and history and awaken in them the pride and show what it means to be a Serb, through all the periods of time and the sacrifices of their ancestors.”

Both Rima, as well as Maik, the meeting with the children leaves a big impression.

“While we are here, I am happy with the smiles of the children, who are happy about little things. I was a volunteer in Syria and helped children who have fled from other cities, because of the terrorist attacks. 24 hours a day I helped, interrupting my academic career and work to help the families and children who urgently need help. And what I am doing today is the continuation of my message to the world that no matter what NATO and the Western countries and the United States do, we will all survive, because we pride ourselves as human beings on our origins. I stand here today as Syrian and want to say that we Syrians love you and know what you have been through and you know what is the truth about my people just because you had to go through the same thing, this is my message.”

These young people of the European Solidarity Front for Kosovo were warmly received by the leaders of the school and the kindergarten. In kindergarten Maik has broken bread under Serbian custom with the Director Ljiljana. Their stay they also used to visit the monasteries and churches in Orahovac and Velika Hoca.