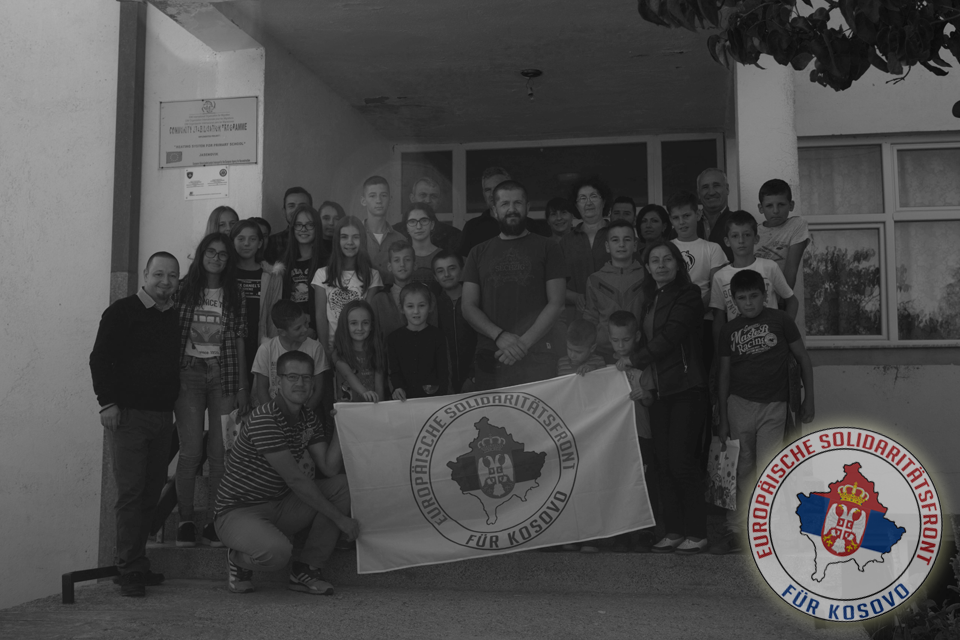 Seven volunteers from Serbia, Italy, Republika Srpska and Germany took part in this year’s Mission-Kosovo The total volume of material and financial donations amounted to at least 2.271,67 Euros.

Since its foundation in Italy in 2013, the ESFK has been able to support many families and institutions. As part of our operations we’ve helped many different ethnic groups. It must once again be underlined that this project is not a superficially political one and, of course, we are not unaware of the changes that have taken place in Kosovo since 2013.

For this reason, our last trip has been focused on the organization of a big sports tournament, where on Thursday, October 17, schoolchildren from Velika Hoča, Orahovac, Sevce, Gotovuša, Osojane, Štrpce and Prilužje competed in volleyball, basketball and soccer. This first ‘’Kosovo and Metohija Schools Championship“, also reported by RTK, was a welcomed change and a great pleasure for everyone involved. Supported by the organization Majka devet Jugovića / Narodna Kuhinja, and thanks the day ended with a meal together and the award ceremony of the teams and best players in each of the three disciplines.

Our mission began on Monday 14 october with the visit of the Šapić family in the village of Banja. As in previous years, we supported the family with the payment of 360 € for the boarding school of son Dejan, who will finish his education in the coming year. With this we were able to complete this project and create space for new things. Further help was provided by our volunteers with the procurement of firewood, needed for the coming winter.
In the next morning we visited the primary school ‘’Milun Jakšić’’, where workers were already building up the five new large display cases for the school library, financed by our donors and volunteers. Director Darko Ristić thanked us and reported on the current difficulties. The teacher Ljiljana Milenković was pleased about our donation in the value of 1.100 € for the libraries.

We spent the afternoon in Istok.

The church in Istok, built in 1929 and dedicated to the Apostles Peter and Paul, stands in the center of the city. According to a United Nations report, the church was damaged during the riots in March 2004. Windows, walls and the entrance portal were destroyed by explosions, the interior, the altar and the icons destroyed by fire. The parish house, located near the church, was completely devastated and burnt down, according to the UN report. After a small tour and a visit to a large fish farm, which also exports its products abroad, Father Nebojsa Sekulić told us about the life of today’s very small church community of about 10 faithful.

As last stop we’ve visited the Children’s Hospital in Laplje Selo, near Gračanica, where we were welcomed by Dr. Sonja Rakočević. In the near future, a new clinic will be built close to the current temporary construction, Dr. Rakočević reported. There we’ve donated mainly toys for the little patients.

Equally eventful, our journey continued on Wednesday. First, we visited the peoples kitchen, Narodna Kuhinja, in the monastery Gračanica, where we again handed out clothes for the poorest, but also some school supplies and made arrangements for the catering of the sports tournament. Without Narodna Kuhinja’s help it would be impossibile to organize lunch for the kids during tournamente. After a strengthening at the base of the facility in Novo Brdo, where we visited the warehouse, the kitchen and the bakery, we set off to visit the primary school ‘’Sveti Sava’’ in Jasenovik.

For the first time we visited this school, which for some years has been looked after by our volunteers from the Czech Republic. In the relatively big school building today 24 children aged 6 to 14 years are taught. After the welcome by director Verica Ristić and her colleagues, we unloaded the things we brought with us and started with an extensive tour through the schoolhouse. Soon the children gathered in the teachers’ room and we were able to give each of the students a little surprise, consisting of various school items such as booklets, pens, rulers and other things. Once again our helpers from Poland should be mentioned here, through whose tireless efforts we were able to hand over a large amount of school supplies for daily needs, not only to the children but also to the teaching staff. For the necessary repair of the pressure switch of the water supply, we also provided a financial support in the amount of 100 €.

After the great first ‘’Kosovo and Metohija Schools Championship’’ on Thursday 17 october, we continued our mission on Friday. In Velika Hoča we first met with representatives of the local football club FK Radnicki and handed over some things for the training. After a short visit in the school ‘’Svetozar Marković’’ we made our way to Orahovac.

There we visited the local church and completed a project of our volunteers from the Czech Republic. Together with Father Velja Stojković, we bought a stove for the new community center. The stove, worth a total of 325€ was delivered shortly thereafter and, together with the albanian trader, set up in its future location.

More important, however, was our visit itself and the fact that we try to be the voice of the Serbs in Kosovo in our home countries. For everyone involved, it has been very emotional days. Therefore we publish a last weeks photo gallery and invite you to follow us on Facebook and Instagram, where you can find more information about our mission!